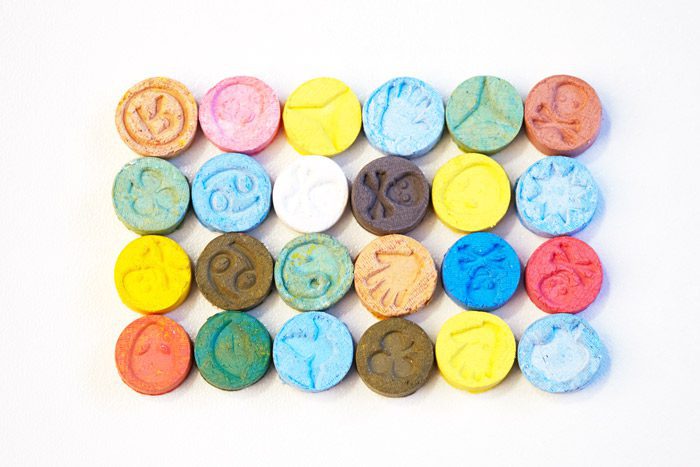 An illegal synthetic stimulant with potentially hallucinogenic properties, ecstasy is commonly used as a party drug or club drug at raves and concerts. Ecstasy use can lead to a wide range of addiction-related problems affecting a person’s health, cognitive function, and relationships with others.

What Is Ecstasy? A Closer Look

Ecstasy is the most common street name for a version of MDMA, or 3,4-methylenedioxy-methamphetamine. It produces euphoria, as well as feelings of long-lasting energy, heightened sensations, and empathy for others. The effects of the drug typically last between three and five hours, but this can vary based on the dosage taken as well as a person’s height, weight, metabolism, and body type.

Ecstasy is often confused with molly, but they are two different forms of MDMA. Ecstasy is a designer version of MDMA in pill or tablet form—often sold as candy necklaces on stretchy strings with imprints of cartoon characters or product logos on the individual tablets. Molly is a form of MDMA that is a white powder or crystal-like substance.

Molly is sometimes viewed as a “pure” form of MDMA, but it’s impossible to know what is in any illegal drug. Both ecstasy and molly can be cut with a wide range of substances, including:

Most of the ecstasy found in the United States is manufactured overseas or in Canada before being smuggled into the country. Slang terms for the drug include E, X, XTC, beans, and adam.

Ecstasy use is linked to an increased likelihood that an individual will begin using marijuana, inhalants, cocaine, LSD, or heroin.

How Can I Tell If My Loved One Is Using Ecstasy?

Some signs that someone is using ecstasy include:

Some of the physical signs of ecstasy use include complaints of nausea, chills, sweating, muscle cramps, and a tight or clenched jaw. Heavy use over a prolonged period of time can lead to paranoia, depression, confusion, and aggression.

Cravings and an inability to regulate ecstasy use despite a desire to do so are the strongest signs that a person is addicted to ecstasy. Since ecstasy is primarily used in social settings, some people who are regular ecstasy users are able to stop when they are removed from the environment where drug use is commonplace. Those who cannot stop using likely have a psychological and physical dependence.

People are less likely to overdose on ecstasy than other illegal substances, but an overdose is still possible—especially when ecstasy is combined with alcohol or additional drugs. An overdose of ecstasy can cause a person’s body temperature to spike. They may have seizures or start foaming at the mouth. An overdose can cause heat stroke or aggravate an underlying heart condition—both of which can potentially be fatal. If you spot the signs of an overdose, call 911 to get immediate medical attention for the victim.

What Treatment Options Are Available?

If you think that your loved one is addicted to ecstasy, it’s important to act quickly. Substance use disorders are chronic, progressive illnesses. Your loved one will not get better without treatment, and seeking treatment before experiencing an overdose or other “rock bottom” moment makes it easier to achieve a lasting recovery.

Treatment plans are always personalized to fit individual needs but generally should begin with a medically managed detox to remove all abused substances from the body and establish a sober baseline. Ecstasy withdrawal often lasts seven to 10 days and is associated with symptoms such as confusion, agitation, cravings, insomnia, fatigue, and loss of appetite. However, medical staff can provide the care and support needed to make the experience as comfortable as possible.

After detox, clients at Waypoint Recovery Center’s South Carolina residential drug and alcohol treatment facility receive intensive individual, group, and family therapy to help build the foundation for sober living. Treatment addresses the underlying factors that led to substance abuse, such as the effects of past trauma and any co-occurring mental health disorders while promoting the development of the habits associated with a wellness-focused lifestyle.

Graduation from residential treatment is followed by outpatient services and continuing care programs designed to ease the transition back to independent living. Alumni activities are offered throughout the year to encourage connections with the broader recovery community.

Looking for a drug rehab in South Carolina? For more information about our treatment programs at Waypoint Recovery Center, please contact us anytime at (888) 978-5188.
Share Post: