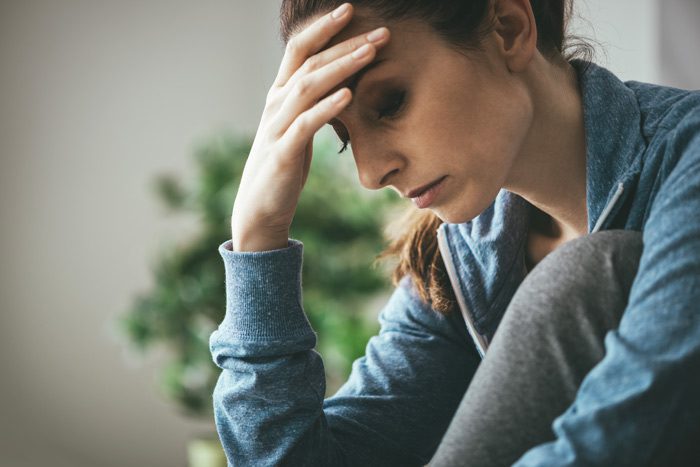 We all have moments where we feel somewhat insecure about how we look. For example, it’s normal to pay extra attention to your appearance before a first date or a job interview.

Body dysmorphia is more serious than these occasional worries. Body dysmorphic disorder (BDD) is a mental health condition characterized by obsessive and intrusive thoughts about perceived flaws in your appearance. In some cases, there is a real physical difference—such as acne or wrinkles. In other cases, the flaw is entirely imagined.

People with body dysmorphic disorder will constantly seek out reassurance about their appearance from those they trust, but there is no level of reassurance that will be enough to quiet their thoughts. They’ll spend hours thinking about how to hide their flaws—which may include choosing specific clothing items, buying expensive cosmetics or skin care products, and seeking plastic surgery.

The anxiety and depression that can be a result of BDD put a person at a greater risk of developing a substance use disorder. In these cases, individuals are drawn to drugs and alcohol as a way to self-medicate the symptoms of their condition.

When a person’s substance abuse develops from BDD, they need a treatment plan that addresses both issues simultaneously. Ignoring the underlying cause of the substance use disorder will only set the stage for relapse when a person leaves the supervised environment of residential treatment.

How Body Dysmorphic Disorder Is Diagnosed

BDD is diagnosed using the criteria outlined in the Diagnostic and Statistical Manual of Mental Disorders, Fifth Edition (DSM-5). DSM-5 places BDD in the chapter on “Obsessive-Compulsive and Related Disorders.”

A person with BDD will suffer from:

Two-thirds of people with BDD experience an onset of the disorder before adulthood, with most cases developing around puberty. However, it is possible for BDD to develop when a person is an adult.

Although women do face significant societal pressures related to their appearance, BDD affects men and women almost equally. The American Psychiatric Association reports that 2.2% of females and 2.5% of males in the United States suffer from BDD. The main difference in how these cases present is that men with BDD are most often worried about muscle mass.

How BDD Relates to Other Mental Health Disorders

A preoccupation with weight is more accurately described as an eating disorder. However, many people with eating disorders have additional appearance concerns that qualify them for a BDD dual diagnosis.

Someone who is transgender or non-binary may worry about their appearance because they believe it does not accurately reflect their gender identity. These individuals may be diagnosed with both BDD and gender dysphoria.

People who have experienced severe traumas such as sexual abuse, emotional neglect from parents and caretakers, or continued bullying from peers may develop BDD as a trauma response. Often, these individuals also meet the criteria for post-traumatic stress disorder (PTSD).

How Body Dysmorphia Can Lead to Addiction

According to the US National Library of Medicine, individuals who suffer from body dysmorphic disorder have a 2% to 13% greater risk of developing substance use disorders. Those who have additional mental health disorders, such as PTSD, face the highest risk.

While self-medicating feelings of anxiety and depression is the most common reason that people with BDD turn to drugs and alcohol, substance abuse may also be a tool to achieve specific appearance-related goals. This is most often seen in those who are abusing stimulants that limit appetite and increase energy while dieting.

Even though substance abuse may seem temporarily effective, it can make BDD more difficult to manage. Substance abuse causes changes in the brain that affect mood and judgment, as well as changes in physical appearance that can increase the distress a person feels when they look into the mirror.

BDD and substance use disorders are both characterized by feelings of intense shame, which can make it hard for a person to reach out for the help they need to recover. An intervention organized by concerned friends and family may convince an individual to seek help, but care must be taken to avoid shaming or blaming the individual for their struggles.

At Waypoint Recovery Center, we provide a safe, supportive, and non-judgmental environment in which to begin the healing journey. We work with our clients to create evidence-based care plans that are personalized to fit their individual needs and lay the foundation for lasting sobriety.

Body dysmorphic disorder is most often treated with cognitive behavioral therapy (CBT) that helps a person identify and address harmful thoughts about their appearance. Since there is evidence to indicate BDD can be linked to low levels of serotonin in the brain, selective serotonin reuptake inhibitors (SSRIs) may also be prescribed,

Substance use disorders are treated with group, individual, and family therapy using CBT, as well as 12-Step support and holistic therapies that promote a wellness-focused lifestyle. Medication-assisted treatment may be recommended if a person has been misusing alcohol or opioids.

To learn more about the programs offered at our South Carolina residential addiction treatment center, contact us today. Our admissions representatives are standing by to answer questions about the treatment process and to assist with insurance-related concerns.

Are you or someone you love looking for co-occurring disorder addiction treatment in SC? For more information about our treatment programs at Waypoint Recovery Center, please contact us anytime at (888) 978-5188.
Share Post: