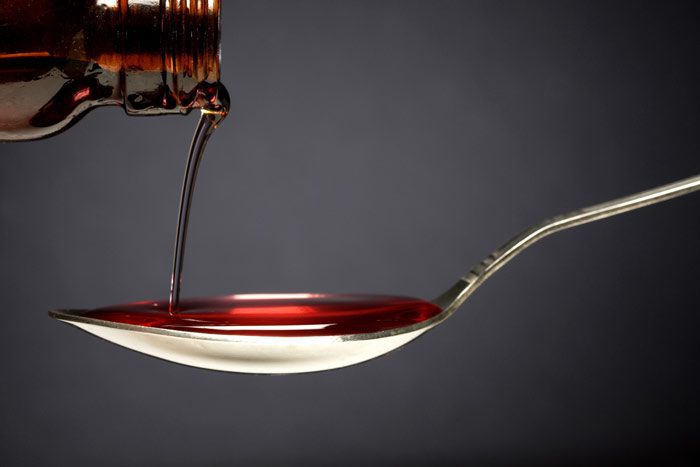 When you have a cough that doesn’t seem to go away, cough syrup with codeine can help you get the rest your body needs. However, it’s important to be aware of the potential for abuse and addiction that the codeine poses—especially if you have preteens, teens, or young adults in your home.

Codeine is an opiate medication that is most commonly found in prescription-strength cough syrup because it affects the signals in the brain that trigger a cough reflex. This is a short-term treatment that can be taken every four to six hours until a person recovers from their respiratory infection.

Codeine is less regulated than oxycontin, morphine, and other more popular opioids and opiates, but it is very similar chemically. As an opiate, codeine can cause euphoria, relaxation, and drowsiness when taken at high doses. Tolerance and dependence can occur when the drug is taken for an extended period of time or at higher than prescribed doses. The abuse of codeine can cause respiratory failure, coma, or death.

Codeine-based cough syrup is not recommended for pregnant women, people under 18, or individuals with a history of asthma or other breathing problems. It can interact with a wide range of medications, including antidepressants, medication for migraine headaches, and stimulants used to treat ADHD, to create serotonin syndrome. This is a serious condition where high serotonin levels accumulate in the body and cause symptoms such as agitation, confusion, loss of coordination, seizures, and high fever. It can be fatal if left untreated.

Cough syrup containing codeine may also contain dextromethorphan, a cough suppressant also found in many over-the-counter cold and flu medicines, or promethazine, an antihistamine used to address sneezing or a runny nose. This can add to the sedative effects when the cough syrup is being used to get high.

What Parents Need to Know About Codeine Abuse

Although substance use disorders affect people of all ages, codeine abuse is particularly popular among junior high, high school, and college students. Young people often believe that codeine-based cough syrup is harmless—especially when it’s readily available in a parent’s medicine cabinet. Curiosity, peer pressure, and the desire to escape the stress of everyday life can lead to experimenting with doses that far exceed what one would use to treat a legitimate medical condition.

Often, young people mix codeine-based cough syrup with soda or juice to improve the taste. “Purple drank” is a cocktail made with codeine cough syrup and Sprite or Mountain Dew. Jolly Ranchers or other similarly flavored hard candies are sometimes added to provide an even sweeter flavor. Also called lean, syrup, and sizzurp, this drink is widely referenced in various movies, TV programs, and songs.

Mixing codeine with alcohol is another common way to abuse the drug. Since alcohol and codeine are both depressant drugs that slow messages between the brain and body, using both together drastically increases the risk of a potentially fatal overdose.

Young people may learn about codeine abuse from their older friends, but pop culture idols can also contribute to the problem. Rapper Lil’ Wayne was admitted to the ICU in 2013 after experiencing seizures and unconsciousness from codeine abuse related to purple drank. He survived but had to have his stomach pumped three times. Many NFL players, including Johnny Jolly, Rolando McClain, Terrence Kiel, and JaMarcus Russell, have been arrested for illegal possession and abuse of prescription-strength cough syrup containing codeine.

To reduce the risk of abuse and addiction, cough syrup containing codeine should be stored in a location that is not easily accessible to your child. Any changes in mood or behavior, such as a lack of interest in previously enjoyed activities, declining performance in school, poor personal hygiene, or trouble maintaining relationships with friends and family, could warrant a full substance abuse evaluation.

Codeine As a Gateway Drug

No two people with substance use disorders are exactly alike, but there is evidence to suggest that abusing cough syrup with codeine may be a gateway into experimenting with other addictive substances. College students, for example, may be introduced to codeine-laced cocktails at a party and later begin to seek out stronger opioids.

If you are concerned that your child may be abusing codeine, it’s important to be proactive. Substance use disorders are chronic, progressive illnesses with complex biological and environmental triggers. They’re not caused by a lack of willpower, and a person won’t get better without treatment.

In South Carolina, Waypoint Recovery Center provides individualized care for men and women struggling with substance use disorders as well as co-occurring mental health conditions such as depression and anxiety. We accept patients ages 18 and up and encourage family members to be actively involved in helping their loved ones build the foundation for a lasting recovery.